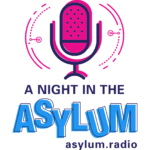 What started out as topic “Trump Crushes” which would have included Trump Rants and Celebrity Crushes (the latter to get to know each other better), quickly turned into Crushes and Beginning Social Gatherings. For Crushes, Jen focused on childhood physical attractions and Darren focused on adult social attractions (is that a thing?). For Gatherings, Jen shared how her first gathering with friends went, and Darren about his father-in-law’s 80th birthday gathering. We were equally concerned about keeping people safe (including ourselves) and each of us had different techniques. Season 2 Episode 14.